I mentioned in my Story about Derek that there were several other really cool stories to be told from this past summer at Street Invaders. Well, I asked one of my assistant leaders, Breanna, if she would be willing to tell a couple of the stories that really stuck out to her, and if I could post them on Normal Sonship.

She kindly obliged, so we get to read some more cool stories.

There are no days off with Jesus.

It was our first full day in Regina, and our team was having a fun day off that included swimming and fast food before we started ministry.

The first pool we went to proceeded to shut down for the day as soon as we went into the change room.

[JOSH: As a quick aside, you should know why the pool shut down for the day. Literally the same moment several of us were about to jump in the pool the lifeguard yelled “EVERYONE OUT!”
Turns out a kid pooped in the pool and they needed 12+ hours to do their sanitization process on it before anyone could swim again. That makes everything else that you’re about to read all the more amazing to me.]

Disappointed, our team debated about what we wanted to do. In the end we decided to find another pool.

We walked into a swimming pool filled with little kids. Our team wanted to get some kids involved in our games, so I went over and asked if they wanted to join. All of a sudden we had a bunch of kids come join our game of “Marco Polo”. The kids had so much fun splashing around with us. Many of the kids had a blast getting shoulder rides from our team and asking us fun questions.

In the midst of the question frenzy, this question came up, presenting a perfect opportunity to tell the two little girls I was with about Jesus. They were so interested in what I was telling them, and the idea of Jesus being their best friend appealed to them so much, that they ended up giving their lives to Jesus.

We were all overjoyed, and ended up leaving the pool that day amidst a lot of hugs from the kids, begging us to come back again. We told them that we would try to come back and leave a Bible there for them.

But wait…the story doesn’t end there!

I was slightly disappointed when we stopped by the pool to leave a couple little Bibles there, and none of the little girls were there. However, Jesus had different plans to allow us to see them again. The church we were working with wanted us to organize an outreach in the park. We bought nail polish, balloons, and face paint to use for the afternoon.

We had only been there for a few minutes when the three little girls I had played with at the pool came running up! We were so excited to see them! We painted their face and nails, and then they proceeded to paint our faces (everyone on our team got a uni-brow, much to their entertainment). 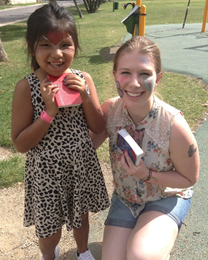 One of the three girls that showed up happened to have missed the part of the day at the pool where I told them about Jesus. While walking across the park with her, I got a chance to tell her the gospel, and she too asked Jesus to come be her best friend. There was so much joy when each of the little girls received their very first little Bible.

This experience was such a great reminder to me that there are people in Canada who have never heard of Jesus before. It was so exciting that our team got to bring the love of Jesus to Regina and see three little souls impacted for eternity.

Sometimes people hearing about Jesus comes in the most unexpected ways…like through something as small as a semi-permanent tattoo.

On our last night in Regina, we decided to go hang out at the Regina Folk Festival to see if we could find anyone to pray for. I spent several months in Nepal and India earlier this year, and I really wanted to meet someone from there. 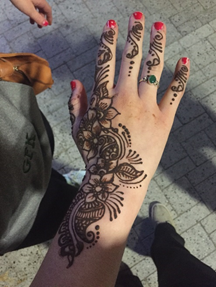 Sure enough, we came across a lady doing henna, and I decided to get one done. I sat down with her, and started to ask her a few questions about herself. She told me she had grown up in India and that her entire family was still there. She told me that her grandmother was very sick, and I asked if I could pray for her. Her eyes lit up with excitement, and before I knew what was happening, she pulled out her phone to video me praying. “I’m going to send it to my grandma so she knows someone in Canada prayed for her!” she exclaimed.

I was stunned that within minutes of sitting down with her, I had managed to pray for someone all the way over in India. After that, I asked her what she knew about Jesus. She said that she had gone to church a couple times but that was it. I proceeded to tell her the gospel story, and I could see that something just clicked within her. She told me that she “finally understood” and when I asked her if she wanted to accept Jesus, she did so joyfully.

I ended up being able to get her connected with a local church and encourage her. And…that henna continued to tell the gospel. People asked me about it until it faded away, and presented a perfect opportunity to tell them about Jesus.